Busy Christmas shoppers? Bustling lunchtime crowd? This 1939 scene looks north along SW 4th Avenue from Yamhill Street. Signs for the Multnomah Hotel (now Embassy Suites Hotel) and the Board of Trade Building in the distance give some perspective. 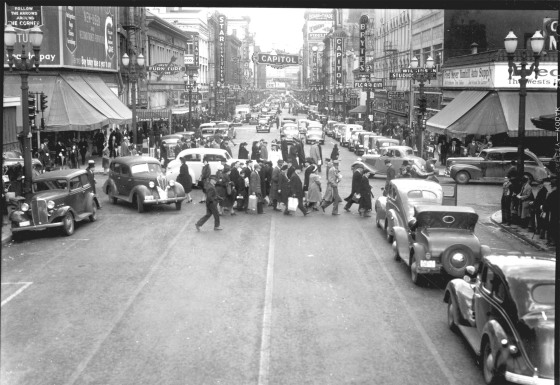 The Portland Public Market building was built in 1933. It stretched three blocks between SW Salmon and Morrison along Front Avenue. The market closed in 1942 and the Oregon Journal used the building as its operations center from 1948 to 1961. The City of Portland bought the building in 1968 and the next year demolished it to make way for an expansion of Harbor Drive, now Tom McCall Waterfront Park.

This 1936 view looks east on SW Yamhill St. across Front.

Long before it became the AIA Portland headquarters, long before it was the S.K. Josefsberg Gallery, it was Mallory’s Stables on the corner of NW 11th and Flanders. The building dates to about 1880 but W.L. Mallory ran his stables here in the early 20th century; this photo was taken in 1917. All the surrounding buildings in the photo are gone.

Drive down SE McLoughlin Blvd today and you’ll be in a virtual tunnel created by the canopy of giant oak trees arching over the road. Those trees were just planted when this 1936 aerial photo was taken. The WPA built the casting pond (upper left) among other amenities. 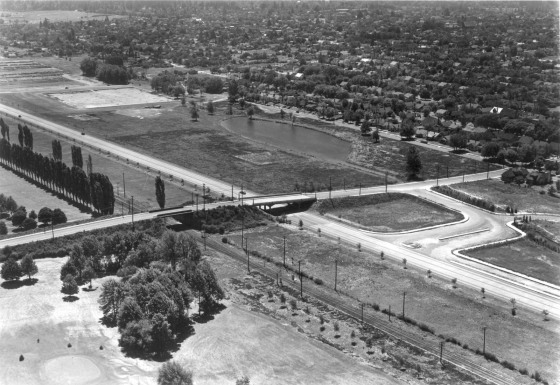 This looks north on N. Interstate with Albina cutting off to the right. The elegant building on the left is now an empty lot while the building on the right is the Gotham Tavern. Light rail has replaced these 1945 trolley tracks.

Construction began on Portland’s main airport in 1926 and was officially known as Portland Airport. The site of the present airport was purchased in 1936 and completed in 1940.